Hawthorn Ladies Cricket Cub was formed in 1933/34 as part of the VWCA which was formed in 1923/24.  In 1937/38 the club split into Hawthorn and South Hawthorn, which ran until 1991/92.  The history of the Hawthorn Ladies Cricket Club is a proud one. Sadly they are no longer in existence but live on through the Monash University Cricket Club. Some of the clubs other achievements include:- The team played in the VWCA’s Pennant Grade for 59 consecutive years (1942-2001) before demotion to District Seconds.  Ivy Williams, Joyce Bath, Elaine Mathews & Marian Goring played for 28-30 years, Claire Warren 23. The White, McGuinness, Gallagher, Milne, Butcher & Hanton families were & some still are, long time supporters of Hawthorn & Womens’ Cricket. Gwen Wilson, Betty Butcher & Hilda Thompson all made valuable contributions along the journey. 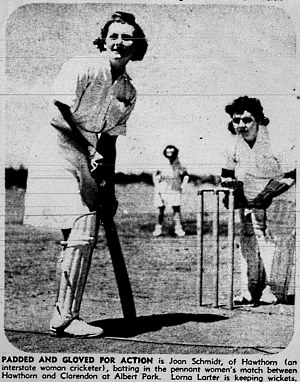 Hawthorn Ladies Cricket Cub was formed in 1933/34 as part of the Victorian Womens Cricket Association, which at the time had two grades, A-Grade played two day cricket, and B grade which played one day cricket and this is where Hawthorn started.  Hawthorn played against teams from YWCA, Semco from Blackrock, Claredon, Preston, Raymond, Youldern, Richmond and Collingwood. Hawthorn Ladies played their home games at the ground behind the Hawthorn power house, a ground now called Fairview Park. In 1935/36 Hawthorn defeated Semco to win the B-Grade Premiership thanks largely to Dorothy 'Dot' Haggis' unbeaten 204 (a world record at the time), the team was then promoted to A-Grade, Hawthorn won a three-peat taking out the 1936/37 and 1937/38 A-Grade Premierships.  In the early years the team was captained by Molly Trezise, and included star players Dot Haggis who had played for Richmond previously, Joan Schmidt, Nell Horder and keeper Lorna Larter.  In 1937/38 the club split into Hawthorn and South Hawthorn, with the new club been formed by Molly Trezise and Hilda Trezise and Mr. A Haggis taking over as Secretary of Hawthorn.  The South Hawthorn club stayed at Fairview Park and ran until 1991/92.  Hawthorn Ladies movied to Wallan Reserve, Hawthorn.

"DOT HAGGIS, Playing for Hawthorn, and making her debut in A Grade cricket, opened the season with a well made 75 runs. Dot holds the world's record score of 204 n.o. The previous best was 201 out, made by an Englishwoman. It is certainly most entertaining when Dot gets going, for she exploits strokes all around the wicket. Her 75 is all the more meritorious, for it was made against last season's premiers. There is trouble ahead for the bowlers if this diminutive player gets set." -- The Sportswoman November 1st 1936.

In 1938, Hawthorn entered a second team in B Grade as the women's cricket continued to grow, and VWCA along with it. Haggis, Schmidt, Horder, Larter continued to dominate and were joined by Young and Kerr.  It took only 4 more years until Hawthorn won their third A-Grade premiership, defeating South Hawthorn by innings and 28 runs.   In 1939 A-Grade was renamed to Pennant Grade.  In the 1941 season Hawthorn were won the A-grade flag again South Hawthorn, and played a semi final in B-Grade, Hawthorn were then promoted ino Pennant for 1942/43.
In 1943 Hawthorn were futher strengthened with Ivy Williams, and an 18 year old Joyce Bath. Bath made her first fifty in Pennant grade in 1944 against Coburg and would go on to be one of the greatest players to play for Hawthorn playing three Tests for Australia.  In 1944 Hilda Trezise was inducted as a Life Member of the VWCA.  1946/47 saw Hawthorn defeat Collingwood again, for a fifth premiership.  In 1947/48 Hawthorn would come runners-up to Claredon, the club would then not play finals until 1951/52 when they lost a semi-final to the Ramblers. Schmidt and Larter retired from cricket after touring England with the Australian team, both played 7 test matches for Australia.
The 1950s saw Crosthwaite preform consistently alongside Bath, Dunning and Williams and the club continued to be a power house of the Pennant grade. The club's sixth flag was in 1953/54 against cross town rivals South Hawthorn, after Hawthorn won the premiership after 4 consectitive semi-final loses.

Betty Butcher held many positions in the cricketing world including Victorian Women's Cricket Association President, Vice President, Secretary and Treasurer. She was the association's delegate to the Australian Women’s Cricket Council and received a life membership in 1970. She was also a delegate to, and secretary for, the International Women’s Cricket Council. At the time of her death in 1999, Betty was both President of the VWCA and the Hawthorn Ladies Cricket Club.  The Betty Butcher Shield, which is the national under 18 girls championship, in named in her honour. Betty Butcher is the author of three books:-

A Time To Soar 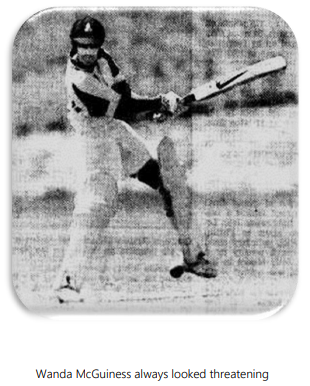 The 60s started with a Grand Final loss to YWCA, and unfortunately Hawthorn had to settle for runners up quite often in the decade.  However in 1967/68 against old foes Collingwood, Hawthorn won their seventh premiership.  In 1974 Joyce Bath was made a life member of the Victorian Women’s Cricket Association.  Joyce served as a long time Captain and Secretary of the Hawthorn Ladies club, and served on the VWCA Selection committee.

In the late 70s Hawthorn had Victorian players Catherine Piggot, Claire Warren and Christine 'Snowy' White in their ranks. Catherine Piggott was an executive member of the VWCA committee.  In 1976 Hawthorn recruited former Australia capatin Miriam Knee from Mitcham as captain for two seasons.   During the 1980s the club moved to St. James Park in Hawthorn.  Keeper-bat Elizabeth Milne took over as Pennant skipper in 1981 and despite a talented list, the club had limited success.  In 1994 the club recruited a young opening batter in Linda Machin from Frankston, and added the talented Sue Butcher from Altona North, Hawthorn were able to make the semi-finals.  In 1986 the club recruited gun allrounder Wanda McGuinness, who would go onto to play for Victoria.  The Hawthorn second team, who were playing A-East grade defeated Box Hill for the 1993/94 Premiership.

In 1994 Pennant Grade was renamed to Districts 1sts, and Hawthorn were lead by McGuinness. The Hawthorn second team against won the A grade premiership in 1996/97.   In 1997 Australian Allrounder Charmaine Mason joined the club, with amazing success, often bowling the side to victory.    Charmaine Mason was the 1997/98 Una Paisley Medal winner.

In 1999 Carolyn Daly was awarded captaincy of the District 1st XI side, the club was able to play Semi Finals 1999/00 and 2000/01. In 2001/02 Hawthorn lasted 4 rounds in District 1sts, until the club were forced to withdraw, and continue only with their second team, in District 2nds which made the semi-finals that season.   Hawthorn were merged with the Monash University Women's Cricket Club at the end of the 2001/02.  Carolyn Daly, Wanda McGuinness and Linda Machin were among the Hawthorn players to come accross in the merger, creating the Hawthorn-Monash Uni Hawks.