Alexandra Kiroi-Bogatyreva might seem like any other first-year Law student trying to juggle study, work and a social life, but she has one other thing on her plate — maintaining her place as one of the most decorated gymnasts in Australia.

In her field of rhythmic gymnastics, not only does Alexandra hold 20 individual National titles, six team National titles, and is 12 time Australian Senior International National Champion in all-around and individual apparatus competitions, but she’s also managed to bag two Commonwealth Games bronze medals (both of which she won at just 16 years old).

“I started gymnastics at the age of two,” Alexandra explains. “It was my parents’ way of developing discipline, determination and work ethic in me.”

“At 11 I won my first international competition in Spain and that was the moment where everything lined up and I knew I wanted to pursue this sport to the max,” she added.

Over the next few years, that’s exactly what Alexandra did, representing Australia at eight World Cups and two World Championships — each time ranking as a top athlete from Oceania.

A global pandemic and multiple lockdowns later, Alexandra knew she had some tough decisions to make if she wanted to continue to compete internationally and remain at the peak of her game.
This prompted a very brave move to relocate to Russia as a temporary base, away from home and family until May of 2022.

“This will enable her to access world class training and events as an Australian representative,” her father Alex Bogatyreva said, which wouldn’t have been possible if Alexandra remained in Australia.

While this major life change is a testament to her commitment and passion for her sport, it doesn’t come without challenges.

“I've been going on long training and competition trips since I was 14. But this time there is an extra psychological weight of not knowing when I can come back home. Out here I need to think and plan ahead, and tend to my needs more attentively,” she said.

“Despite all these difficulties, I love the challenge, I love my sport of rhythmic gymnastics, and I represent Australia with pride on the world's sporting arena. Every day makes me a more resilient and stronger person.”

Currently, Alexandra trains around 30 hours a week, and despite such an intensive training regime, her studies remain her top priority.

“Sport taught me organisation, patience and work ethic, which in turn allow me to compartmentalise study, training and recovery,” Alex said. “If you really want something to be done, you’ll find a way, not an excuse.”

True to her word, she recalls waking up in the early hours of the morning to “tune into a Public Law lecture” the same day she was set to compete at the World Cup in Romania!

As semester two comes to a close, Alexandra’s competition timetable has only intensified. In the last two months alone, she has participated in high-level International tournaments in Moscow, Greece, Japan and Romania against current World Champions and other top-of-the-rank gymnasts — none of which have stopped her from managing to hit some awesome personal bests in her individual hoop and ball exercises.

Her striking performance across these events has also improved her world ranking, meaning she now sits first in the Commonwealth Nations. This is a great place to be just eight months ahead of the Commonwealth Games, “plac[ing] her in great contention for medals at the upcoming Games,” Alexandra’s father said.

Other than having her sights set on making waves at Birmingham’s 2022 Games, Alexandra says she has a number of other fantastic goals for the 2022 competition season including qualifying for the Maccabiah Games (Israel) and representing Monash University at University Games in Chengdu (China).

We wish you the best of luck for what’s to come, Alex! No matter what part of the world you end up, we’re excited to cheer you on and see all that you can achieve!

Follow Alex’s awesome gymnastics journey on Instagram or Facebook here. You can also view her most recent world championship performance from her time in Japan here. 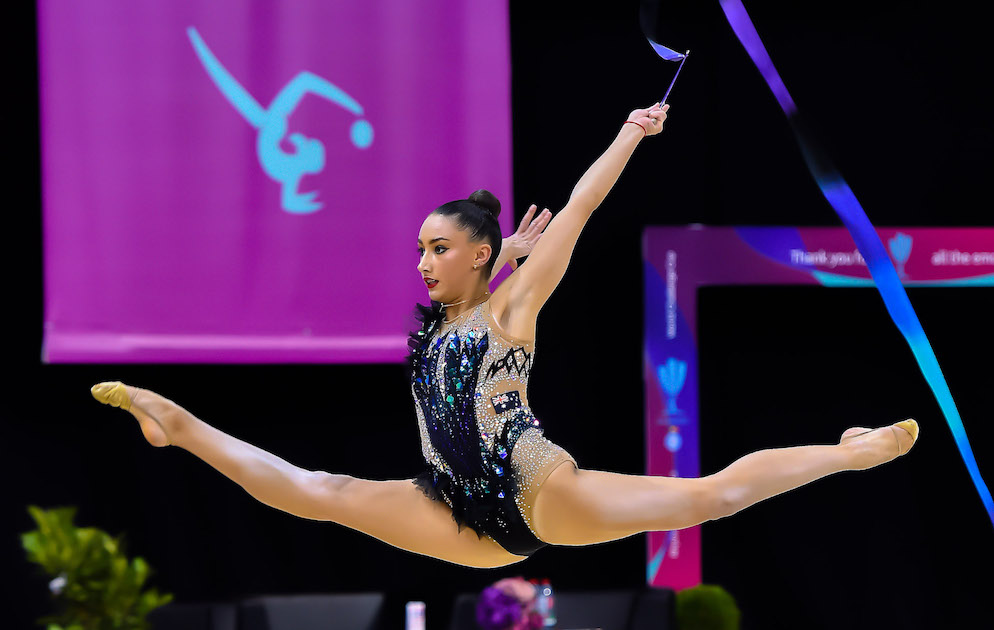