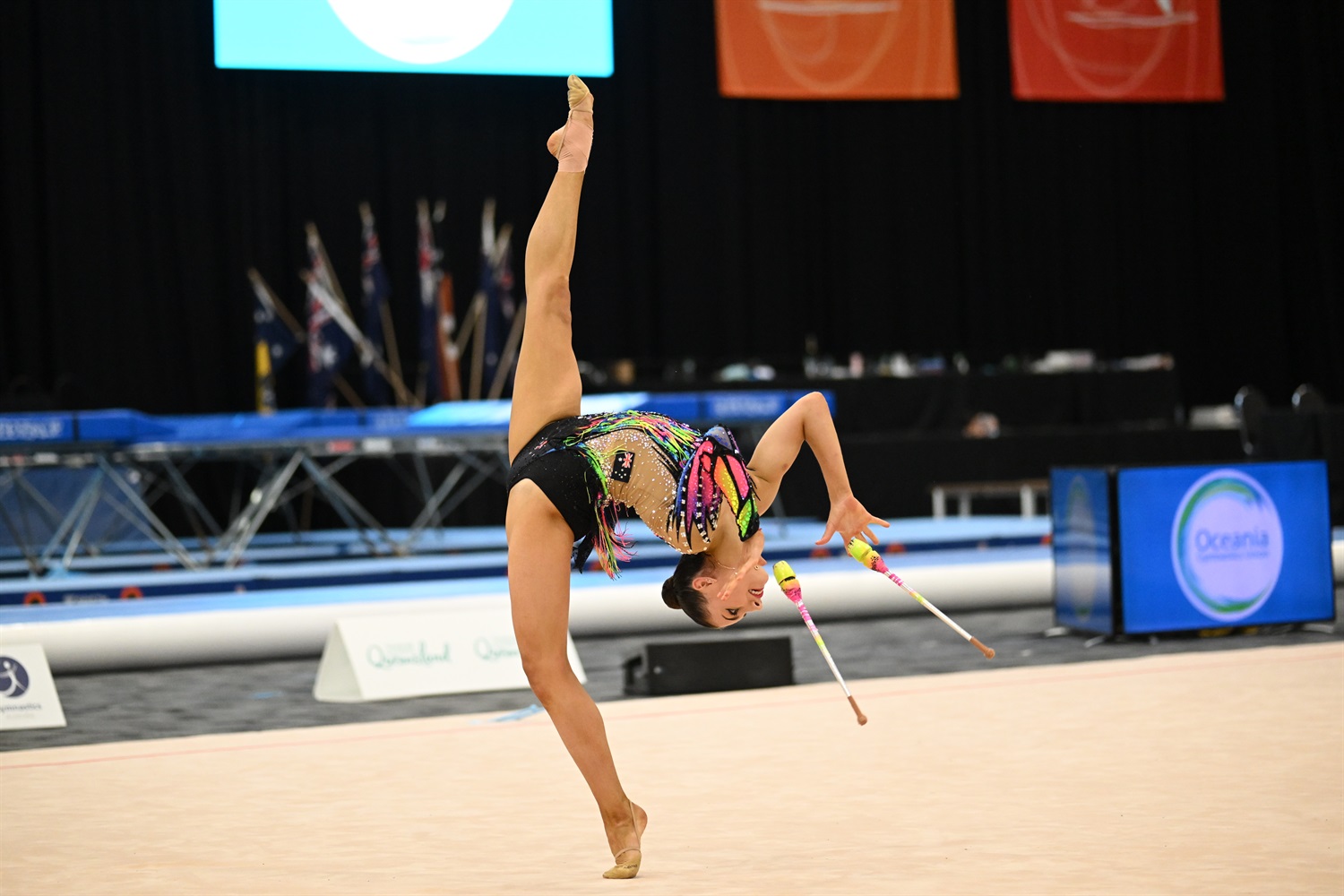 From Australia to Azerbaijan, to the US and Israel, Rhythmic Gymnast and Monash Law student Alexandra Kiroi-Bogatyreva’s year so far has been full of intense training, elite competition and study, and it only sets to ramp up over the next few months!

Speaking to Alexandra on the phone whilst she packs for Azerbaijan, it was fascinating to hear her reflect on the past six months, and to hear about the goals she wants to achieve this year.

Since we caught up in November last year, you’ve accomplished quite a bit in those months… From representing Australia in two World Cups to being crowned the Australian All-Around Senior International Rhythmic Gymnastics Champion! What has been your proudest achievement since then?

I guess all the competitions that I've done have been part of my achievements. Like you said, the two World Cups and probably the all-around senior national champion title at the Australian Championships. Last year I was second at the competition, so for me, I think that was my greatest achievement for the past six months because I was able to conquer all my fears and do my job on the day.

Being away in Russia for an extended period of time, training and representing Australia, what did you learn whilst you were there and how did the pandemic impact your experience?

I've definitely learned how to live and survive independently. Being a gymnast without a specific coach because I am based here and there made it very difficult in terms of my competitions. So, I learned to rely on myself, no one else, which has made me psychologically stronger for sure.

My support is pretty much my family despite being away from them. I am in contact with them every day. They helped me with my living residency in Azerbaijan when I moved. They're definitely one of the biggest support groups that I have. You could even say they're like my mini managers!

I've also had a lot of support from the Azerbaijan National team, in particular their head coach. She took me in as one of her own. The girls there have been very welcoming and we're very close friends now, so I'm in a unique position where I get help from the people that are happy to help me.

Despite your busy schedule, how are you going with your studies? I understand you are studying Law, how’s it all going?

I'll be honest, it's very, very difficult! I'm doing law part time, so I think I'm going to be 75 by the time I finish university because I am doing the bare minimum of subjects! I'm training 8 to 10 hours a day in Azerbaijan at the moment, so my studies are very hard to fit in. When I got back after the Australian championships though, I've been catching up with all my quizzes and essays and assignments and currently I'm preparing for my exams. The most important thing is to make sure that you're organised and block out those specific times for study, because it's really easy to procrastinate and say I'll do it later. But as an athlete you just cannot afford to lose time, so I just make sure that I am on top of everything and don't get too far behind. The Elite Student Performer Scheme and the Law Faculty have been a great help in supporting me through my journey.

Considering gymnastics is an international sport that has taken you to so many amazing countries, I'd love to know how many countries you've been to and where has been your favourite?

I think I've been to over 30 to 40 countries in my entire life. For the past six months I've been in four different countries. I do not have a favourite because when I travel for competitions like World Cups overseas, we don't have designated time to go and be a tourist in the city, because we are there to do our job. So unfortunately I'm not able to experience it fully. But since I've been living in Azerbaijan, it definitely has become one of my favourites. The atmosphere, the people, and some of the architecture they have there is quite unique.

Looking to the future now, you are heading back to Azerbaijan, and then travelling to the US and Israel to compete. What are you most looking forward to and what are some of your goals you’d like to achieve this year?

I am preparing in Azerbaijan for a month and then I have qualified for the World Games in America. Straight after that I'm going to the Maccabi games in Israel, then I am hoping to compete in the Commonwealth Games.  Then at the end of the year, most likely World Championships. So there's a lot of things to look forward to this year and I just have to make sure that I don’t use up all my energy! I was supposed to compete at the World University Games, however, unfortunately the Australian team pulled out and then in the end the whole competition wasn’t going forward which is quite sad as I was looking forward to it.

I can't even imagine how busy you would be, but it sounds really exciting and you're doing such an amazing job in representing not only Australia but Monash as well. So all the best Alex and congratulations!

We wish Alex all the best of luck for the rest of the year, you can keep updated with Alexandra’s travels and competitions on her Instagram.