Monash x ORDER Academy finished its OCS campaign with a victory over the RMIT Redbacks. Unfortunately, the win wasn't enough to qualify for the postseason with the squad missing out by one ladder position and finishing in seventh place, one win away from the top six.

Despite the premature end to the campaign, the team was very happy to finish on a high and earn a hard fought victory after a string of losses.

Team coach Eric Lee said despite the teams confidence and strong start, a loss of momentum mid-way into the season hurt.

"This year we started off strong with a win, and had a lot of confidence going into the season," Lee said.

"We weren't sure at first how we'd do given that it was a fairly fresh roster and we hadn't had much time to train together.

"We had a good string of results in the early stages giving us a bit of a confidence boost. Unfortunately we started to lose our momentum as we had to prioritize our study.

"It was difficult to find times to all train as a team. Nonetheless, the boys worked extremely hard and ended up in 7th (4-6), only 1 win short of reaching the playoffs."

Although playoffs was always the goal, there were plenty of positives for ORDER Academy to take away and our Monash stars learnt a lot.

Mainstay of the squad throughout the season, David Xu, said it was a "tough ride but a good journey".

Teammate Harry Yuan was said he was looking forward to returning next year.
"I improved myself a lot, but I think there is still much more to do be done," Yuan said.

Overall the ORDER Academy team members saw it as a highly competitive and enjoyable experience.

Thanks to all our Monash e-Sports stars for giving it their all and we can't wait to see you return next year and go one better! 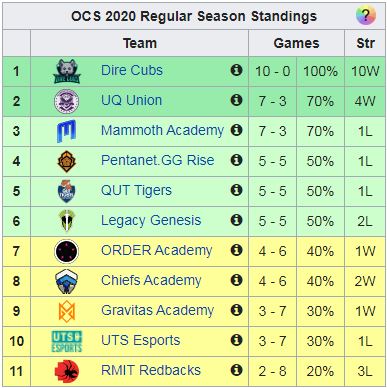