The League of Legends Oceanic Challenger Series continued this week and Monash x ORDER suffered its first loss of the season.

In a tightly contested match, ORDER Academy was narrowly defeated by the QUT Tigers.

The contest lasted just over 30 minutes but ORDER Academy, made up entirely of Monash students, wasn't quite able to go the distance.

"Unfortunately, the team was starved of gold and struggled to take fights in their favour," Lee said.

'Mog' had another strong week for the squad, playing admirably for the match-ups entirety. 'Eva' was also among the teams best players, putting in a strong performance and ensuring QUT's victory didn't come easily.

Next up is Cheifs.A, who Monash x ORDER take-on at 8pm this Thursday night and can be live streamed via Twitch here: https://www.twitch.tv/RiotGamesOCE

Best of luck to our League of Legends champions! You'll be back in the winners circle in no time! 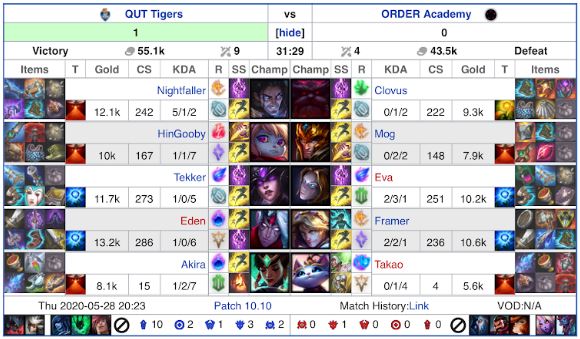