Monash alumni and Monash Blues President Alex Carr has had plenty to do during lockdown!

Not only has Alex been busy juggling work and Blues commitments, but lockdown has also seen the 29-year-old become a father.

Despite all of the obvious issues going on in the world, Alex said the whirlwind of fatherhood has served as a perfect escape.

"It's [fatherhood] been interesting, I think you sort-of live in your own little bubble once you've got a baby on board," he said.

"Whether it be from just a lack of sleep or something else, at times you just forget everything else happening around you."

Alex and his partner have embraced parenthood and although the responsibility has come at a crazy time, the couple hasn't missed a beat and can't wait to show off their baby to family and friends.

"Obviously these circumstances aren't exactly what you expect to face when you have a newborn, particularly not being able to see family and friends, it'll be good once that eventually happens," Alex said.

In tandem with juggling the responsibilities of becoming a father, Alex has been busy at work. As a National Account Manager for Dulux Group, Alex does a lot of work with Bunnings and lockdown has seen a boom in people's desire for DIY.

"I've been in the pretty fortunate position where everyone is getting into DIY products whilst they've been stuck at home," Alex said.

"COVID has blessed us a little bit in that sense. Between work and baby, I've kept busy over the last six months.

For anyone feeling a little lazy or unmotivated during this time, look no further than Alex for motivation. Fatherhood and work aside, he is also serving his second year as the Monash Blues Football Club President.

Taking over at the start of 2019, Alex said the club being forced to move online hasn't been easy, but from a committee perspective, there has been some silver linings.

"The flexibility of everyone moving online has actually allowed the committee to meet a bit more regularly," he said.

"We often found it difficult to have meetings with a number of people on the committee who were busy with other things... so the virtual world has actually allowed us to communicate a lot more easily and a lot more regularly than in the past.

"I foresee that change being a constant for the committee going forward."

However, despite some logistical benefits, COVID has made it difficult for the club to maintain its social atmosphere. A key part of any football club, the Blues have been forced to find new ways to interact socially.

"We did a fun run in the initial lockdown that was driven by the players," Alex said.

"The run raised money for Kara House and was in anticipation of the season returning and starting to get people fit and give them something to train for.

"Another thing they've done really well and it's probably tailed off a little bit recently just because the season would have ended by now, but they've done a number of online trivia events which have been really good and really enjoyable.

"So those are a couple of really good initiatives driven by the players just to keep people engaged and just for something a little bit different.

"Sporting clubs and footy clubs are really social places and it's important to keep in touch and try to interact with some familiar faces, particularly during a time like this."

After everyone having an enforced year off footy, Alex predicts a large number of members will be returning next year with a thirst to get back into the game.

"We have a really strong level of engagement heading into next season," he said.

"You definitely miss the camaraderie of a sporting club and it's really important for people to engage with their best mates and sport is such a great pace for that to happen.

"I think in lockdown a lot of people have realised that it's such an important element of their lives, so we're really confident that we will get some really strong numbers [next year] provided that the season goes ahead."

As a student Alex played for the Blues while completing his Bachelor of Commerce, and now as the club's President, he implores all his members to enjoy playing footy and soak it up while they can - because it can't last forever.

"I did play footy at Monash, I was at Mannix College for three years and it was brilliant. Obviously it was just so convenient to be able to pop across the road to train and play," Alex said.

"All your mates were doing the same thing so I just got to build a great relationship, particularly with other people from other pools of residence across the journey and I've still kept in touch with a lot of those guys I played footy with.

"Once my body gave up on me I thought I'd still like to be involved with a sporting club in some capacity and the president at the time reached out and said would I like to get involved."

A big thanks to Alex for taking the time to have a chat and congratulations on becoming a father! We wish you and your partner all the best for the remainder of the year.

To learn more about the Monash Blues Football Club, visit them here.

Please note that the images used in this article were taken prior to the COVID 19 pandemic. 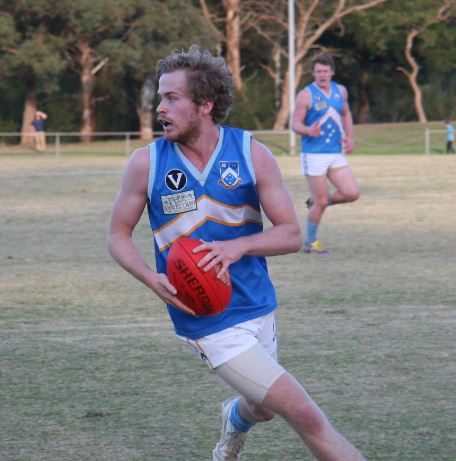