Monash University alumni and President of the Monash Hockey Club, Rachel Rodrigues, has been keeping herself busy whilst living in lockdown.

The 30-year-old has spent the last 13 years of her life embodying everything the Monash community is all about. Ever since arriving on Monash campus in 2008, Rachel has been an active member of the hockey community with 2020 marking the third year of her tenure as Club President.

However, for obvious reasons, the coronavirus pandemic brought a halt to many of Rachel’s 2020 plans for the club. With in-person training, all competitions and physical social events cancelled, Rachel, like many people across the globe, has been forced to fill her time in other ways.

“Isolation was really tricky in the first iteration of lockdown,” Rachel said.

“I, as the president of the hockey club, spent most of the winter playing hockey, both during the week and on the weekend. So trying to fill that kind of time was difficult. I started doing a few things, like reading a lot and watching a bit more TV but I started to miss physical activity, so I got into things like virtual exercise and yoga a bit more.”

Unfortunately for Rachel and Victoria in general, one lockdown wasn’t enough. Our hockey stalwart however, has managed to cope in lockdown 2.0 even better than the first, picking up new hobbies to keep her active and engaged during the day.

“In the second iteration (of lockdown) I've started to get more active and I've picked up woodwork as a hobby,” she said.

“I just started and I've already built myself a paper towel holder and a phone stand.

“Since I come from a very artsy background I'm not super handy, so it's been fun just sinking my teeth into something totally different and learning something new.”

Beyond just her personal welfare, Rachel has also been looking after the Monash Hockey Club. As president, she has facilitated the regular engagement of members in a virtual capacity and made a point of ensuring new members feel welcomed to the club via her podcast ‘Two Sticks No Goals’.

“An ongoing joke last year was that I was going to start a podcast called 'Two Sticks No Goals' because I love everything hockey and there was quite a bit of banter around it,” Rachel said.

“So in iso, I started a podcast for all our members...and I had a new episode every week with a different club member where I did a bit of a profile (of them).

“It was a way for members less familiar with the club to get to know as many people as possible, virtually.”

In tandem with listening to the podcast, club members also participated in regular online fitness sessions facilitated by the club.

“We were really lucky that we had online fitness sessions really early on (in lockdown) as well, it was driven by some of the boys and some of the girls to keep everybody connected,” she said.

Rachel’s involvement with the Monash Hockey Club began in her first year of university. She joined the club in order to make a few new friends and find an outlet from her studies.

The now Club President said she fell in love with the communal atmosphere right from her first game and hasn’t looked back since.

“When I was a first year (at university) I didn't drive...but when I contacted the club I got a lift to the first game with one of my new teammates,” Rachel said.

“Everybody was really friendly that first game and it kind of just introduced me to a whole new Monash community.

“The best part about being a club member when you're a student is, any one of your teammates is on the campus at any given time. So whenever I used to have uni breaks I could just meet up with a couple of friends and go down to the pitch to have a bit of a play.

“I think as a student the biggest thing for me was that hockey was my break (from study)... and towards the end of my studies those little breaks ultimately helped make me a better student.”

Having learnt so much as a student, Rachel said she relishes the opportunity to pass those teachings on to younger club members and help them find a positive study and life balance.

She cited the importance of finding an outlet and taking a break from study on occasion, in order to look after your mental and physical wellbeing.

“It's been nice to have that experience in my past and pass it along to somebody else who otherwise may not have thought they could afford the time (to take a break),” she said.

Rachel finished her undergraduate at Monash in 2011 with a degree in Arts. She then completed an Honours the following year before earning a Masters in International Business/European and International Studies in 2014.

Upon completing her studies, Rachel moved into full-time work at the university and currently works within the External Relations and Development and Alumni team (ERDA) as it’s Business Improvement Coordinator.

The former Masters student said her time as president of the hockey club has really helped her career, teaching her many lessons which have translated to the workplace.

“I've met a lot of people in the role and I've taken all these different leanings from all the people I've met along the way and taken it into my career,” Rachel said.

“My time at Monash certainly prepared me to be a 'jack of all trades'.”

Looking to the future, Rachel plans to remain in her role as Hockey Club President a little while longer. She has high hopes for 2021 and is aiming to simply continue the good work of the past few years - retaining members, increasing volunteers and ensuring the club maintains it’s all-around supportive environment.

“Everybody's got everyone else's interest at heart and that's what makes it such a great place.

A huge thanks must go to Rachel for all her efforts with the Monash University Hockey Club and we wish Rachel all the best of luck for whatever exciting things the future may hold.

Find out more about the Monash University Hockey Club here.

Please note that the images used in this article were taken prior to the COVID 19 pandemic. 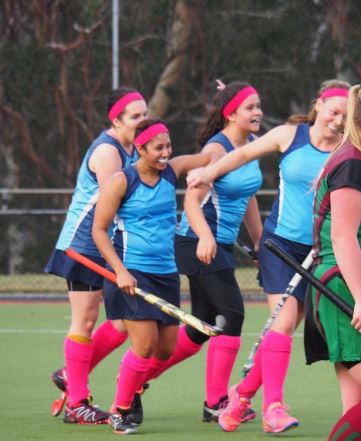