First of apologies as this is going to be a bit lengthy match report.. Before I proceed with the match report - a Big thank you to all who came down to the ground Club Legend Rohi, Pasan, Gideon, Ashutosh & Voey and others if I have missed it (Sorry for it). Now lets get down to match report-

The feeling is still sinking in of going back to back premiers after coming close to winning the flag twice in previous 3 seasons as the club.

Having lost the Toss which didnt matter as we wanted to bowl first as well. Old horse (Yes you read it right) Andy and Gaurav gave us the ideal start. Gaurav keeping it tight on one end while Andy got the two crucial wickets including the top scorer of the league. At the end of the 10 overs Yarra were 2/48. Utkarsh bowled great short spell of 3 overs bit unlucky to get carted for 13 runs in his third over, while Chanaka kept it real tight giving away only 15 runs in his first spell of 5 overs.

A brief shower reduced the game to 33 overs aside.

After this it was all Harpreet show- bowled a beautiful spell of 4/25 to change the game on its head and allowing us to restrict the opposition to 147. A man of the match performance from him.

Korak and Himanshu gave us a perfect start 24/0 off 4.3 overs when the rain stopped the play for 20 mins. With overs reduced to 28 overs I preferred to play it safe asking the batsman to play bit defensively as we only have to draw the game to win the flag.
But both the openers kept playing their shots maintaining a healthy runrate of 5 runs an over. We lost Korak's wicket on 74 in 14 overs. But soon after that Himanshu retired after scoring 50 for the team.
Then it was time for some big hitting show put on by Chanaka who had been the pillar for the team this season smashing 8 fours and a six on his way to 3rd fifty of the season for himself.
With rain forcing another stoppage but this time overs werent reduced and with the team's view of chasing down the runs to win the game fair and square, the umpires started the game in light drizzle which went to get quite heavy for the liking of scores (James and myself). We lost Parag in search of quick finish to game which was duly done by the pair of Andy & Shoaib.

A big thank you to all who put up their hands when required and helped with the numbers especially during the June and July period. having rotated 28 Players (yes you read it right) in the matter of 8 rounds - it was an hell of ride as a captain.

Once again a big thank to the entire team not just who played finals (Jay, John, Raji, Shivam, Anand, Vinay, Jinendra and others).

Lets focus on the summer season for the next flag but at the same time lets work towards 3-peat next winter season. 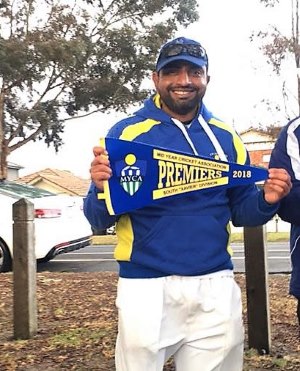